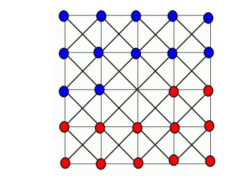 This game for two, was played in ancient Egypt as far back as 1400 BC. The game was taken by the Moors to Spain, where it is mentioned in 13th century manuscripts, and the Spanish name Alquerque derives from the Arabic El- quirkat. Watch out for being ‘huffed’.