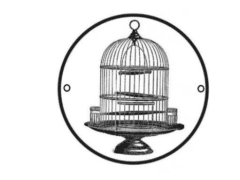 A Thaumatrope or “wonder turner” is an optical illusion based on combining two images with movement.

It was invented in 1826 by the English physician J.A. Paris. Thaumatropes were popular when the Longfellow children were young in the mid-1800s. You can make one with very few supplies in your own home!

The optical effect is produced by persistence of vision, the retention of the first image by the brain long enough to superimpose it on the other, making the two parts of the image appear together.