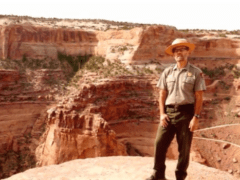 It would likely surprise many visitors to the Island in the Sky district of Canyonlands National Park to learn that the wide-open plateau that they are standing on was once covered in a much denser forest.

Prior to about 10,000 years ago, as the Earth was transitioning out of the last glacial period, this region had a significantly cooler and wetter climate. This supported a much different plant community than the high desert ecosystem we experience today. We could imagine that our mesa top was covered with ponderosa pine, white fir, aspen and Douglas fir trees, much like nearby higher elevation areas currently do, such as the La Sal and Abajo mountains. As this region warmed and dried, these forests were replaced by the pinion-juniper woodland, grassland, and sagebrush steppe communities that are better adapted to the conditions we have here now.

So how is it that we a find a lonely copse of stately Douglas fir trees tucked in an alcove visible from Shafer Canyon Overlook? The impressive geology of Canyonlands is part of the story. Erosional forces that carved these canyons left a cooler, shaded, north-facing alcove for these trees to retreat into as the surrounding temperatures rose. This alcove was formed in the Navajo sandstone. This porous rock layer is well known for holding water, which then seeps out from the recess where it meets a less permeable rock layer. These factors combine as a microenvironment distinct from the surrounding landscape and favorable as a tiny forest refuge.

Known as a relict population, these Douglas firs are isolated by at least twenty-five miles from the next nearest population. Relict populations when separated for long periods of time can develop into new sub species due to limited genetic input. They can also be vulnerable to disappearing altogether if they experience a catastrophic event or if conditions change dramatically. The Colorado Plateau is experiencing warmer and dryer conditions associated with global climate change. During 2017 and 2018, the region experienced 16 months of below average precipitation. If these trends continue, we might see our vegetation shift even further and it is likely that these Douglas Firs will no longer be capable of growing in the park. For now though, we can enjoy these representatives of a different ecosystem from a different time.