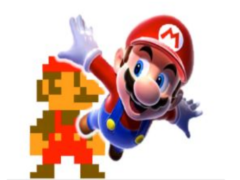 How have video game consoles changed over time?

In 1965, Intel co-founder Gordon Moore predicted that computer processors would double in speed every two years. Twelve years later, the first modern gaming console — the Atari 2600 — was released, sparking a revolution in video games that have become ever-faster and more realistic.

Students create exponential models to predict the speed of video game processors over time, compare their predictions to observed speeds, and consider the consequences as digital simulations become increasingly lifelike.