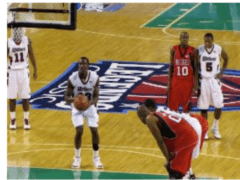 In the 2005 Conference-USA Tournament game, Memphis player Darius Washington Jr. was fouled at the buzzer during a three-point shot.

With his team down by two to Louisville, he stepped up to the foul line for three shots.

In this lesson, students will compute the probabilities of a win, loss, or tie for Memphis. They will also determine whether or not it was smart for Louisville to foul at the buzzer, and will investigate the conditions when fouling at the buzzer in a close game makes sense.