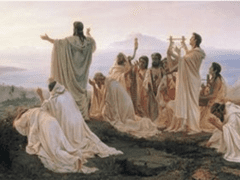 What secrets are hidden in squares?

While the Pythagoreans are best known for their triangle theorem, they were in fact religious cult who believed in the god of mathematics. Pythagoras and his followers believed that everything in the universe could be described as a ratio of two numbers…and tenet that was quickly challenged.

In this lesson, students use concrete models to explore square numbers and square roots and confront the philosophical and moral questions posed by the existence of irrational numbers.