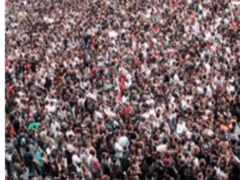 How is the human population changing?

Scientists estimate that on Halloween 2011 the global population reached 7 billion. But how long did it take humanity to grow to this level, and how large should we expect our population to become?

In this lesson, students will explore how many people the Earth is adding and losing each minute, and use this to build an exponential model for human population growth. They’ll also predict what the world population will be in the future and discuss the environmental consequences of population growth and economic development.