Mathalicious: Belly of the Beast 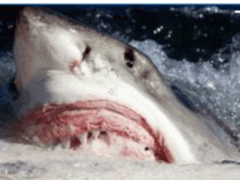 Why did the giant megalodon go extinct?

Great white sharks are terrifying, but also awesome. They’re huge, their teeth are as sharp as knives, and some even have a taste for human flesh.

But as frightening as great white sharks may be, their ancestor, the megalodon, was even scarier.

In this lesson, students model the bodies of different sharks using cylinders, and explore how the volume of a cylinder changes when its dimensions change. They learn that the megalodon was a massive ocean beast, but after estimating the dietary needs of such a large animal, they discover that its size may ultimately have led to its downfall.