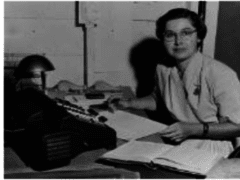 Elizabeth Roemer was born in Oakland, California, on September 9, 1929.

Her interest in astronomy began in childhood. In an oral history interview she recalled an incident in high school that drove her passion for astronomy:

It came about when I was a freshman in high school during the years of the Second World War, when many people were teaching on emergency credentials and were not properly qualified teachers. A general science teacher made a number of statements that had astronomical implications. One involved a map of the tilt of the Earth’s axis and how the seasons came about, and one involved the statement that Polaris was the largest star. I can’t tell how, but even at that stage I knew enough to know that what we were being told was not so. But I didn’t know what the right answers were. I was encouraged that if I didn’t find things in books- you don’t find what is the largest star- then to look elsewhere. I was in touch with one of the teaching assistants in the Astronomy Department at Berkeley who helped me get information, and that led to interest in other aspects of astronomy.

While still in high school, Roemer was the winner of a Westinghouse Science Talent Search. She then attended UC Berkeley and earned a B.A. in astronomy in 1950 and a Ph. D. in 1955. Dr. Roemer joined the U.S. Naval Observatory as an astronomer at the Flagstaff, Arizona, station in 1957. In 1966, she moved to the University of Arizona where she worked in the Lunar and Planetary Laboratory. Dr. Roemer was asked to chair the committee that set up the Department of Planetary Sciences in 1972. She specialized in astrometry, with a particular focus on comets and minor planets. Over her career, Dr. Roemer is credited with the recovery of 79 comets, the discovery of two asteroids, and the co-discovery of Jupiter’s moon, Themisto. She won many awards and was a leader in several professional astronomy organizations. The asteroid 1657 Roemera was named in her honor. Dr. Roemer retired from her position at The University of Arizona in 1998. She continued to be an active member of the astronomy community until her death in 2016.