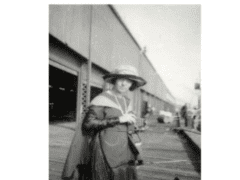 Elizabeth Williams was born in 1879 in Putnam, Connecticut.

She attended the Massachusetts Institute of Technology and graduated in 1903 with academic honors and the distinction of being one of the first women ever to do so.  In 1905, Percival Lowell hired her as a “computer,” i.e., a person who manually performs calculations, and she began work in his Boston office. Her primary duty was to carry out the calculations associated with work on Lowell’s hypothesized Planet X, although she also worked on other projects.

In April of 1919, Williams moved from Lowell’s Boston office to the observatory in Flagstaff, where she continued to calculate and also handled some of the observatory’s correspondence. In 1922, Williams married George Hall Hamilton, who had also been working at Lowell Observatory.  Constance Lowell asked the couple to leave, believing that it was inappropriate for them to keep working at the observatory after their marriage.  George Hamilton accepted a job with the Harvard Observatory’s station in Mandeville, Jamaica, where he worked until his retirement in 1924.  Until his death in 1935, he and Williams were still living in Jamaica, where he was doing independent work at his private observatory, Hamilton Observatory. After George’s death, Williams moved to Lebanon, New Hampshire to live with her younger sister, Louise Ring. Together they ran “Peaceful Acres,” a summer retreat home. Williams died in 1981 in Enfield, New Hampshire at the age of 101.