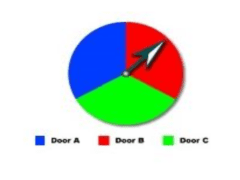 A student picks one of three doors in the hopes of winning the prize. The host, who knows the door behind which the prize is hidden, opens one of the two remaining doors. When no prize is revealed, the host asks if the student wishes to “stick or switch.” Which choice gives you the best chance to win? The approach in this activity runs from guesses to experiments to computer simulations to theoretical models. This lesson was adapted from an article written by J. Michael Shaughnessy and Thomas Dick, which appeared in the April 1991 issue of the Mathematics Teacher.