Forbes: 4 Ways That Scientists And Academics Can Effectively Combat Racism

It could be your colleague, your coworker, your staff member, or your student. As the world mourns the violent and unnecessary death of yet another black man — George Floyd — at the hands of police officers, many well-meaning people of all races are struggling with how to take effective action. While attending protests, protecting and standing in solidarity with black Americans, and donating to various causes are positive actions in the immediate term, these actions alone will not address the systemic problems of inequality inherent in the system.

These persistent inequalities play out in some extremely unpleasant ways even in the relatively sheltered environments of science and academia. However, we can all take important steps towards being part of the solution, even as individuals. These four steps, as limited as they are, can play a major role in transforming science and academia into a safer, more inclusive environment. It’s on each of us to choose to take them.

1.) Recognize that your black students face additional challenges above and beyond those faced by all students. Most of us take our safety and our right to freely exist in this world for granted. It’s perhaps the most basic of all human rights, and we are all deserving of having that right respected.

But that right isn’t applied equally to people of all colors in our society. A white or Asian student alone in their lab or office at night doesn’t have to worry about police or security questioning their right to be there. They don’t have to worry about arousing the suspicions of others simply by being present. They don’t have to cope with an onslaught of racially insensitive, ignorant, and discriminatory comments regularly directed their way. And in fields where black Americans are underrepresented, like science and academia, there are insufficient resources to support them and correct for these injustices. 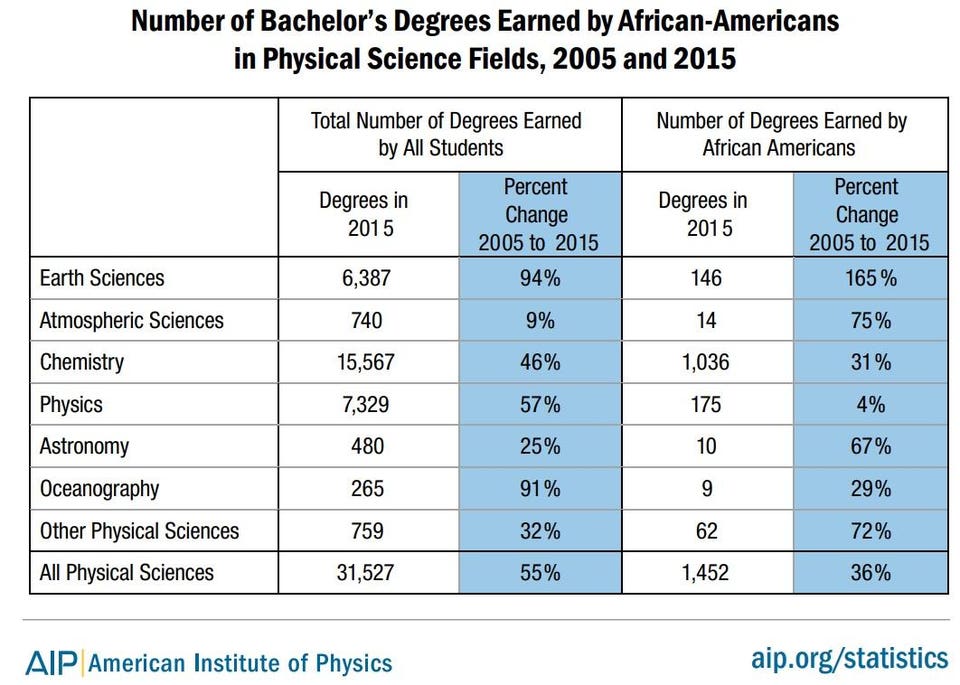 There are an enormous suite of untrue, unsupported stereotypes about black Americans that nevertheless are widespread. These include accusations that black people are:

compared to their peers of other races.

Even if you yourself don’t hold these preconceptions or prejudices, many people in these professions do. Even a small percentage of people with bigoted views can wind up having enormous negative impacts on a minoritized, underrepresented, and vulnerable group. If you want to help open a space for black people to succeed in your field — even if your field goes beyond science or academia — you first need to accept that they face additional challenges and obstacles that are unique from those faced by non-black members of your field. 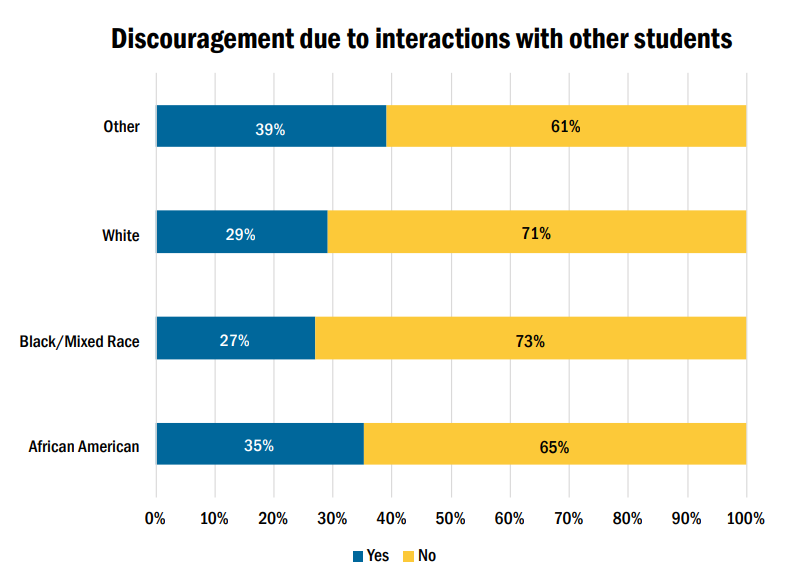 2.) Actively create a welcoming, supportive environment. One of the most powerful messages you can send, even as a lone individual, is the message of, “you belong here.” The best way to combat a tradition of exclusion is by valuing inclusion, or as a study commissioned by the American Institute of Physics put it earlier this year, by opening a space for young black scientists to succeed.

What does it mean to “open a space” for someone?

It means to provide encouragement to counteract the disproportionate discouragement they receive from interactions with other students. It means going the extra mile to make sure they’re engaged and on track for success. It means to make an extra effort to invite them to extracurricular activities, including dinners, drinks, and after-work social activities with other professionals in the field. And it means making an effort to correct inappropriate behavior directed towards them, including derisive comments, talking over them, and unwanted interjections. 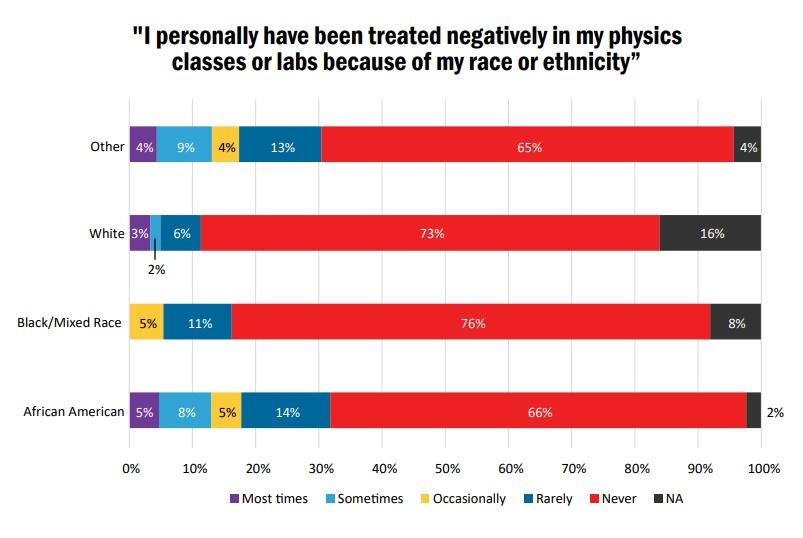 The types of discouragement experienced by black scientists, science students, and academics may seem like small obstacles to success, but they are both common and appear frequently. They are known as microaggressions, as deftly discussed by Dr. Marshall Shepherd here on Forbes, and they not only exist, they have the impact of undermining that sense of belonging that all people in any field crave.

In addition to all of this, though, there’s the element of having to reckon with the elements in society that actively demonstrate to them that their lives are not valued equally. Extend not only your compassion to them, but your commitment to not allowing them to be oppressed. Speak up on their behalf when their voice isn’t being heard, and speak up in their absence when you see or hear racially offensive behavior. Be their “get out of jail, free” card. As many have simply put it: silence is compliance.

3.) Provide resources to ease the financial burdens that perpetuate systemic inequalities. It should come as no surprise that people facing financial challenges have their resources spread thinner than those who don’t, and that plays an enormous role in determining the level of representation in many fields, including physics and astronomy.

According to the American Institute of Physics’ TEAM-UP initiative, environment and economics are the only two factors that matter in determining the representation of black students among those who earn degrees. Students (and the departments that host them) who don’t face financial hardships are not only at liberty to spend less time and energy working to support themselves or their family outside of their academic pursuits, but can take advantage of opportunities to attend conferences, present their research, and meet peers, mentors, and future employers and collaborators.

The need for financial support cannot be overstated in righting a systemic wrong. According to the January 2020 TEAM-UP report:

A consortium of physical sciences societies should be formed to raise a $50M endowment from foundations and individuals to support minoritized students with unmet financial need in physics and astronomy and to support the implementation of this report’s recommendations by departments.

The lack of these two pillars — of a supportive environment and of financial security — only perpetuates and magnifies those pre-existing inequalities that black Americans face. If you, your laboratory, your department, or an affiliated organization has the means to do so, extending financial support to your young black colleagues can help support their success in unparalleled ways.

4.) Do the hard work of learning how to be inclusive yourself, rather than putting the onus on your black colleagues. For many, many years now, black Americans from all walks of life have been sharing their stories and their perspective. Now, at the time when they are hurting the most and feeling so thoroughly unheard in America, is not the time to burden them with asking them to explain what’s going on in their world.

That’s a question that requires an enormous amount of emotional labor, and that labor needs to go towards the major issue of government-sanctioned violence against black people. Sure, by all means, offer support. But don’t ask them to do the heavy lifting for you; just go out into the world and be supportive. If you want to be an ally against racism, just go out, listen to their voices, and help them in exactly the ways that they’ve stated, over and over again, that they need help.

In the classroom, make an extra effort to support black students. Outside of class, reach out to black students and let them know not only that you’re here for them, but how you’re here for them. Invite them to study sessions, to office hours, and explicitly tell them about opportunities that might be well-suited to them. Follow up on their progress. Introduce them to others at conferences, seminars, and to your colleagues you think their interests and intellectual pursuits would align with.

Perhaps most importantly, be compassionate and respectful. Your thoughts about their feelings or response to current events are not germane to the situation. Many of them are hurt; many are angry; many are fearful; many are fed up. Your role is not to judge them; your role as an ally is to accept their feelings and support them as people.

These four steps are not the only ways to support young black scientists and academics, of course, and the lessons can (and should) be applied to other minoritized groups and other fields as well. But as a basic starting point:

can help fight against the inequities that racism and bigotry bring. For too long, too many voices in our society have failed to recognize the value inherent in the lives of black Americans. As Solon of Athens put it more than 2500 years ago, the best state to live in is “that state in which those who are not themselves wronged work as hard as those who are to achieve justice.”