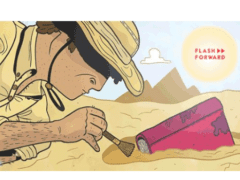 Today we travel to a fully digital world, a world where paper is a thing of the past.

And when I started working on this episode, I assumed that this future was more on the likely end of the spectrum. Maybe not in a few years, but eventually, we’ll probably stop using paper, right? Well, pretty much everybody I talked to said I was wrong.

The first person we talk to in this episode is Michael Makin, the President and CEO of Printing Industries of America, an organization that represents the printers all over the United States. And Printing Industries of America isn’t the only organization out there trying to keep printing alive. In 2014, a group called Two Sides launched a campaign arguing that companies who advertised paperless billing as “green” were violating guidelines set by the Federal Trade Commission. And they actually got over 20 companies to stop advertising their paperless billing options as “environmentally friendly.” And this is one of the big arguments that the paper industry makes against going without paper: that it’s actually not nearly as environmentally friendly as people claim.

But Makin also says that he is totally convinced that paperlessness is just never going to happen. “I mean let’s be real, we are NEVER going to live in a paperless society,” he says.

Now, you’re probably thinking to yourself, “well duh Rose, of course the guy who represents the paper industry is going to say that paper will live forever.” Yes, yes, I know, but he’s actually not the only person who told me that they didn’t think paperlessness was coming any time soon.

Richard Harper told me the same thing. Harper is a researcher at Microsoft and the co-author of a book called The Myth of the Paperless Office. In the book Richard and his coauthor Abigail Sellen trace the phrase “paperless office” back to the 1970’s when Xerox founded a research group called PARC. And PARC was working on networked systems, ways for offices to talk to each other over all kinds of digital networks. But to push networks forward, they felt like they had to push something else out. So they villified paper as “the devil” and tried to propose the idea of a utopian future without paper.

But what Richard and Abigail found in their research was that paper wasn’t a devil, and it wasn’t really going anywhere. And they also found that most people don’t really want paper to go away. In fact, there’s no evidence that people are using less paper today than they were in the 1970’s.

If we do wind up going more and more digital, one thing we’ll have to worry about is how and where to store all those files. I can barely keep the files on my own computer in some kind of logical order, but when we’re all working digitally how do we preserve and archive anything? To find out I called up Lynda Schmitz Furig, who’s the electronic records archivist for The Smithsonian. Her job is to preserve everything digital that the Smithsonian creates. She tells us how they catalogue and store everything the Smithsonian creates.

But Lynda, like everybody else I talked to, doesn’t think we’ll have to worry about an entirely digital world just yet. And Naomi Baron, she’s a Professor of Linguistics at American University and the author of Words onscreen. The fate of reading in a digital world, agrees. We close out the episode talking to her about how digital screens change the way we read and remember things.

There are a bunch of things we didn’t get into in this episode, like the fact that paper is used for a lot more than just books and magazines and things to read. It’s in the grocery store, used as labels, it makes up our toilet paper and posters and the boxes in which we ship things. It’s used for money and for cooking and for research, and all sorts of other stuff.

If you have thoughts on our future with or without paper, or want to suggest a future topic for the show, you can send those by email to info@flashforwadpod.com or by voicemail or voice memo at (347) 927-1425. You can also find us on all kinds of social media like Facebook, and Twitter and now Reddit!

Flash Forward is produced by me, Rose Eveleth, and is part of the Boing Boing podcast family. The intro music is by Asura and the outtro music is by Broke for Free. Special thanks this week to Casey Broughton, Stephen Granade and Matt Weller. The episode art is by Matt Lubchansky.

That’s all for this future, come back next week and we’ll travel to a new one.