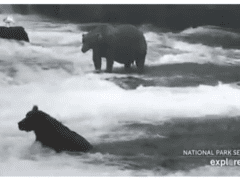 Watch salmon leaping up the falls, while brown bears compete with each other for the best fishing spots.

The largest and most successful bears can catch and eat more than 30 salmon (over 120 pounds) per day! Bears are most abundant at Brooks Falls in late June and July during the sockeye salmon migration, but also keep an eye out for bald eagles, lots of gulls, and maybe even the occasional wolf trying to partake in the salmon buffet.

LIVE VIEWING HOURS
All Day and All Night
ESTABLISHED
June 2012