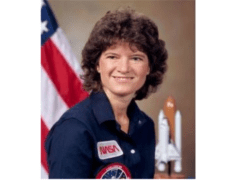 Training: Sally Ride attended Swarthmore College for three semesters. She spent her fourth semester taking physics courses at the University of California, Los Angeles. At the beginning of her junior year, she attended Stanford University, where she graduated with a bachelor’s degree in English and Physics. She remained at Stanford, where she earned a masters and PhD in physics by studying X-ray interactions with interstellar medium.

Accomplishments: After answering an advertisement in the Stanford University newspaper, Ride was selected to join the space program in 1978. She was selected for the 1983 space mission aboard the Challenger. On June, 18 1983, she became the first American woman in Space. In 1984, she returned to space on the Challenger, spending a total of 343 hours in space. After returning from space, she accepted an associate position for NASA in Washington D.C. Once leaving NASA in 1987, she began Sally Ride Science, an organization that creates entertaining science programs for middle school children, especially focusing on girls.

Fun Fact: Sally Ride wrote seven books on space aimed at children to encourage the study of science and space!