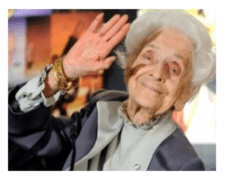 Training: Rita decided to attend the University of Turin Medical School after witnessing a close family friend die of stomach cancer. There, she was taught by Giuseppe Levi who introduced Rita to the developing nervous system. After she graduated in 1936, she became Guiseppe’s research assistant. Unfortunately, Rita’s academic career was cut short when Benito Mussolini (dictator at the time), banned all Jews from academic and professional careers. This didn’t stop Rita! She would continue to study from a home laboratory and was invited to study at Washington University in St. Louis!

Accomplishments: Rita studied the growth of nerve fibers in chicken embryos. While studying at Washington University she did her most important work: isolating the nerve growth factor (NGF)! For this discovery she received the Nobel Prize in Medicine in 1986. From 1961 to 1969, Rita directed the Research Center of Neurobiology in Rome, and was director of the Laboratory of Cellular Biology from 1969 to 1978! Rita also founded the European Brain Research Institute in 2002 where she served as its president!

Fun Fact: Rita was the first Nobel Prize winner to reach a 100th birthday! She celebrated her birthday in Rome’s city hall!