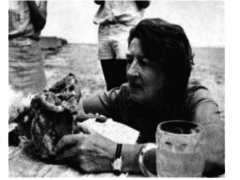 Training: Mary started her education at a Catholic convent, but she was expelled twice! Once for refusing to recite poetry and then another time for causing an explosion in a chemistry laboratory. Because of these expulsions, Mary was not in good standing to be accepted at a university. She moved to Kensington so she could attend lectures unregistered at University College London and the London Museum. She took classes in archaeology and other related subjects. She also learned a lot by going on excavations, or “digs”.

Accomplishments: Mary discovered the first fossilized Proconsul skull, which is an extinct ape now believed to be an ancestor of humans. For most of her career, Mary worked with her husband Louis Leakey in eastern Africa at the Olduvai Gorge. They uncovered tools and fossils of ancient humans! Mary helped to develop a system to classify these tools. By the end of her career, Mary had become the director of all excavation at the Olduvai Gorge and had discovered 15 new species and one new genus!

Fun Fact: In April 2013, Mary was honored by Royal Mail in the UK to be one of the 6 people selected for “Great Britons” postage stamp issue!

Read more about her career! Paleontologist