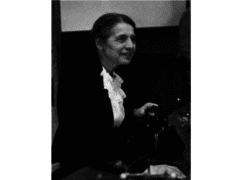 Training: Lise was inspired by her teacher, physicist Ludwig Boltzmann, and went on to study physics and become the second woman to receive a doctoral degree in physics at the University of Vienna in 1905. After this she became an assistant to Max Planck.

Accomplishments: Lise worked with chemist Otto Hahn, and together they discovered several new isotopes. In 1909, she presented two papers on beta radiation. She was also part of the team that discovered nuclear fission which eventually lead to the creation of the atomic bomb. Unfortunately, Otto Hahn was the only one awarded the Nobel Prize for the discovery of nuclear fission. This is one of the biggest examples of women’s scientific achievements being overlooked by the Nobel committee! Lise has however, been awarded 21 scientific honors and awards for her work!

Fun Fact: Element 109, meitnerium, is named in honor of Lise!