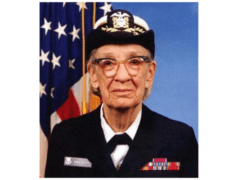 Training: Grace Hopper studied math and physics at Vassar College. After graduating from Vassar, Grace continued to Yale University to obtain her master’s degree in mathematics. She became an associate professor at Vassar in 1931, while continuing to go to school at Yale. She earned her Ph.D. in mathematics in 1934. Grace joined the U.S. Naval Reserve in December 1943, during WWII. She was ranked as a lieutenant in 1944. Due to her strong mathematical background, Grace was assigned to the Bureau of Ordnance Computation Project at Harvard. While there, Grace learned to program a Mark I computer.

Accomplishments: Grace is best known for leading the team that created the first computer language compiler, which led to the popular COBOL language. Grace did not invent COBOL, but she did encourage its adaptation.

Fun Fact: Grace was awarded the National Medal of Technology in 1991. She is buried in the Arlington National Cemetary.