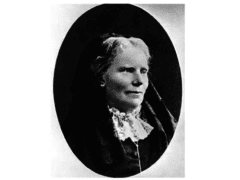 Training: Elizabeth first started to learn about medicine when she was staying with Reverend Dickson while she was saving up money for medical school; he had many medical books in his library. Elizabeth later moved to Philadelphia and studied anatomy privately with Dr. William Elder hoping it would help her get into one of Philadelphia’s medical schools. Finally, in October 1847, Elizabeth was accepted as a medical student at Geneva Medical College which is now known as Hobart College in New York. She graduated from medical school on January 23, 1849!

Accomplishments: Elizabeth was the first woman in the United States to receive a medical degree. She opened up her own practice in New York City where she had to fight for people to take her seriously! She eventually started giving lectures and even published a book. She also helped to take care of patients during the Civil War, even when some of the male doctors would not work with her just because she was a woman. Elizabeth fought hard to overcome these challenges is now known as a social reformer and helped to promote the education of women in medicine.

Fun Fact: Elizabeth Blackwell’s family helped escaping slaves during the Civil War by hiding them in her home!

Read more about her career! Doctor