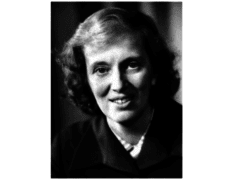 Training: Although her early education did not teach her Latin or more complex science subjects, Dorothy paid for private tuition to enter the Oxford University entrance exam. At 18, Dorothy started studying chemistry at Somerville College, Oxford, which was one of the University of Oxford colleges for women only. She studied for a PhD at the University of Cambridge where she learned about x-ray crystallography which can be used to determine the structure of proteins.

Accomplishments: Dorothy is most famous for discovering three-dimensional molecular structures. With the help of colleagues, they discovered the structure of penicillin. It was for this discovery that she received the Nobel Prize in Chemistry for in 1964. In 1969, Dorothy was able to discover the structure of insulin. She made all of these discoveries using x-ray crystallography! X-ray crystallography became a widely used tool critical in determining structures and functions of different molecules.

Fun Fact: Dorothy was one of the five “Women of Achievement” selected for a set of British stamps issued in August 1996!