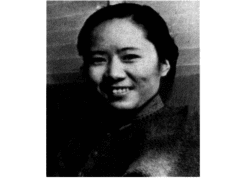 Training: In 1929, Chien was admitted to the National Central University in China. Due to government regulations, all students wanting to move onto university needed to serve as a school teacher for one year. So in 1929, Chien taught at the Public School of China. After this year, Chien could officially start at the National Central University in the Physics Department. After she graduated in 1934, she did 2 years of graduate level study in physics at the Zhejiang University.

Accomplishments: Chien is known as the “First Lady of Physics”! She was a professor at Smith College, Princeton University, and Columbia University. Chien also did research for the Manhattan Project which worked to create an atomic bomb. She helped to develop the process for separating uranium metal into it’s isotopes by using gaseous diffusion. She received the first Wolf Prize in Physics in 1978 for her experimental work.

Fun Fact: Chien was the first female president of the American Physics society; she was elected in 1975!