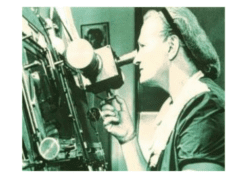 Training: Although her mother only paid for her brothers to go to college, Cecilia still managed to win a scholarship Newnham College, Cambridge University to study botany, physics, and chemistry. It was there that she became interested in astronomy, after attending a lecture by Arthur Eddington on his expedition to observe solar eclipses in order to test Einstein’s general theory of relativity. Even though she finished her studies, she did not receive a degree because Cambridge did not award degrees to women until 1948.

Accomplishments: Cecilia decided to move to the United States to pursue her doctoral degree and became the first person to receive a doctorate in astronomy from Radcliffe College, which was the all-female counterpart to Harvard College. Her PhD thesis found that the sun’s composition differs from the earth’s, and that stars are mainly composed of hydrogen and helium and was called “undoubtedly the most brilliant Ph.D. thesis ever written in astronomy” by astronomer Otto Struve.

Fun Fact: Cecilia was the first woman to head a department at Harvard!