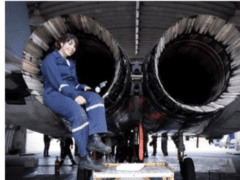 Have you ever wanted to tell your friends that you know “rocket science”?

Read about women who are aerospace engineers:
Tilly Shilling