Everyone gets stressed. Many of us find that listening to our favorite song usually brightens up our mood. Scientists wanted to study whether music can actually affect stress levels in the body.

Enzyme: a protein that changes the speed of chemical reactions.

Hormone: a chemical message released by cells into the body that affects other cells in the body.

Immune system: all the cells, tissues, and organs involved in fighting infection or disease in the body… more

Nervous system: organ system made of a network of specialized cells called neurons that coordinate the actions of an animal and transmit signals to and from different parts of the body… more

Stress: a feeling we have when reacting to a particular event. Examples of stressful situations include studying before a big test or when a basketball player has to take a shot that could win the game.

Stressor: an event or object that leads a person to feel stressed and experience a stress response. 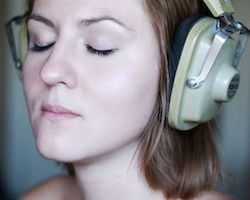 Scientists were interested in how music affects stress levels. Image by Kashirin Nickolai.

Today is one of those days where nothing seems to be going right. You’re frustrated and ready for the day to be over. When you get home, you put on your headphones and try to relax. You close your eyes and fill your mind with the twang of the guitar, the beats of the drums, and the cascading sounds of the piano keys. Sometimes all it takes is listening to soothing music to calm you down. Many people listen to music when they are trying to focus or relax, whether it’s hip hop, the twinkling sounds of wind chimes, or the background music in elevators.

In the PLOS ONE article “The Effect of Music on the Human Stress Response,”   scientists looked at how music affects the body’s response to stress.

Stress: Wear and Tear on the Body 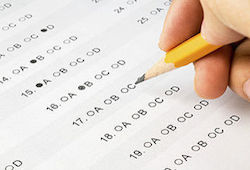 Taking a test can be stressful for many people. When you are stressed, your body responds by releasing hormones such as cortisol. Image by AlbertoQperello.

The big test is tomorrow, but you’ve barely had any time to study. With so much information to learn and bedtime at hand, you feel like you are doomed to fail. These sorts of situations often make people feel stressed out. When we feel something important to us, like a test grade, is being threatened, our body reacts with a stress response.

A stress response is your body’s way of preparing itself so that you can work hard and fix the problem that is causing you stress. Your nervous system releases hormones into your bloodstream to tell the body how to react. One of these hormones is cortisol.

Stress hormones like cortisol help prepare your body to run. Long ago, we needed to run in response to stressors like predators. Image by Garry Knight.

Cortisol is a hormone that is released during stress to help the body deal with whatever it is that is causing the stress. For example, it could tell the body to bring more energy to your muscles to help you run if necessary. Millions of years ago, running was something that people would have needed to do when they were stressed. Back then, stress didn’t come from tests or homework, but from the threat of fast predators.

Even though a stress response helps you to work hard and ace your test, it can also hurt you. Cortisol tells your body to send more fuel to your muscles, but that energy has to come from somewhere else in your body. Oftentimes, it will take that fuel from other areas of your body, like your immune system. If your immune system isn’t getting as much energy, you could become sick much more easily. Beyond that, if your body is constantly preparing to run, fight, or otherwise react to stress, it can wear you out and put you at higher risk for getting sick.

Music: A Source of Relaxation?

Too much stress can make it more likely for a person to get sick, and so scientists are trying to think of ways to keep people from being overly stressed. In this experiment, scientists studied the effect of music on stress. 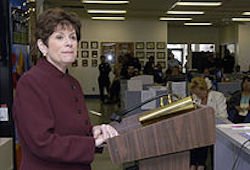 Scientists asked subjects to give a speech as part of the Trier Social Stress Task. Image by BotMultichillT.

Scientists asked women to either listen to relaxing music, nature sounds, or to nothing. Following the music session, they had the women stand in front of an audience and perform two tasks. First, each woman had to give a speech. Second, each woman had to do complicated math in her head. These two tasks make up the Trier Social Stress Task, a method scientists use as a sure-fire way to make people feel stressed.

Scientists know that the body responds to stress by releasing cortisol, and so they used it as a way to measure stress. Scientists compared cortisol levels after listening to music and at various times after doing the Trier Social Stress Task. The scientists also measured an enzyme called alpha-amylase that is found in saliva. Alpha-amylase is important to your body as it kills unwanted bacteria and it helps break down the food that you eat. Alpha-amylase is also released by the nervous system in response to stress, though scientists still have a lot to learn about this process. 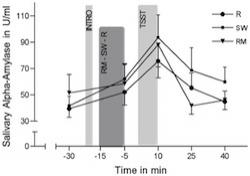 This graph shows the levels of alpha amylase in women listening to relaxing music (RM), rippling water (SW), or nothing (R).

This graph shows the levels of alpha amylase in women listening to relaxing music (RM), rippling water (SW), or nothing (R). Click for more detail.

The scientists tested how classical music and nature sounds affect levels of cortisol and alpha-amylase.The alpha-amylase levels of people who listened to classical music went back to normal more quickly compared to the people listening to nature sounds. This suggests that relaxing music helps the body to return to a non-stressed state more quickly.

The results of this study were a bit mixed. Scientists still have a lot of work to do to see if listening to music can reduce stress by lowering cortisol levels in the body. They are also studying whether listening to music can improve health and prevent disease. Whether music of the subjects’ choosing could mean more stress relief is also still unanswered.

Until we know more, maybe play some tunes or listen to some nature sounds when you feel stressed. Even if it doesn’t directly help your stress level, it’s still nice to hear a good song.