Diabetes affects nearly one tenth of the population in the United States, but we still have a lot to learn about the disease. Researchers are finding that a lack of specific proteins might reduce our abilities to absorb sugar, making it a key player in the diabetes problem.

Beta cell: a type of cell that is in the pancreas. It is responsible for making insulin.

Cell: a tiny building block that contains all the information necessary for the survival of any plant or animal. It is also the smallest unit of life… more

Diabetes: a disease where the body does not process sugar correctly, causing high blood sugar… more

Endoplasmic reticulum: a compartment in the cell that is involved in making proteins.

Glucose: a sugar that cells use as energy.

Protein: a type of molecule found in the cells of living things, made up of special building blocks called amino acids.

You take another bite of the apple. It’s crisp, juicy, and sweet…delicious. Most of us like eating, but why is eating important? The food you eat is broken down in your stomach and intestines and digested into molecules your body uses to work and grow. Some of these molecules are sugars called glucose. Glucose is an important source of energy that lets the cells in your body keep working. 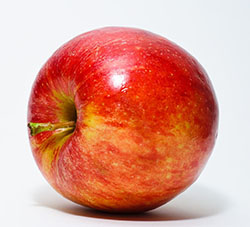 Our bodies depend on sugars and other carbohydrates to make glucose, an important source of energy. Image by Abhijit Tembhekar.

Glucose travels through your veins to get to all the organs, like cars on a highway. For your cells to change glucose into usable energy, glucose has to enter cells through special pathways called glucose transporters. Think of these transporters as highway off-ramps.

Because insulin is so important to the body, scientists took a closer look at just how insulin is made in the PLOS Biology article, “The IRE1α/XBP1s Pathway Is Essential for the Glucose Response and Protection of β Cells.”

Your cells have many different organelles that are responsible for doing various jobs.

Most of your cells can be thought of as little cities. There are organelles (“tiny organs”) that do specific jobs within the cell. Some make new items, others package or ship them, and others might move them out of the cell.

One of the cell factories that make new items is called the endoplasmic reticulum (ER). The ER makes proteins as well as lipids like fat. Each of these molecules has a very specific structure.

Let’s look closer at proteins. An important part of the structure of a protein like insulin is the proper folding of the parts of the protein. You can think about this like folding paper for origami. Proteins must be folded into their proper shape to work correctly. This folding happens in the ER.

Think of IRE1α as one of the managers of the factory, who makes sure everything runs smoothly. In case of trouble, IRE1α can call on its employee XBP1 to order other workers to take care of the unfolded proteins.

When the Manager is Missing

So what happens when the cell factory manager (IRE1α) isn’t around? The scientists who wanted to answer that question looked at the changes this caused in the cell. 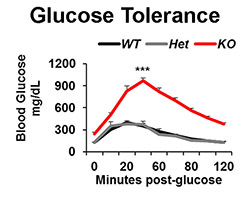 KO mice can’t move glucose out of the bloodstream as fast as other mice.

They measured blood glucose before and after a meal in mice and humans that have IRE1α. They also measured the same changes in glucose in mice that were made to not have working IRE1α (called KnockOut, or KO, mice). After healthy mice and humans eat a meal, their blood glucose levels go up. The increased glucose causes insulin to be secreted to allow glucose to go from the blood to other cells.

In knockout mice, however, blood glucose stayed higher in the blood than in the healthy, “wild-type mice” after they ate a meal. Blood glucose not decreasing over time after feeding is indicative of diabetes. The scientists found that mice that lacked IRE1α showed signs of diabetes compared to control mice that still had IRE1α.

Because glucose and insulin affect one another, the researchers took a closer look at how insulin is made. You can think of making insulin as kind of the same as making an omelet. First you need to have eggs and then you need to scramble them, before you can cook the eggs to make the omelet. 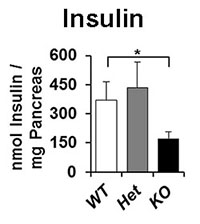 The researchers measured the insulin and preproinsulin in the pancreas of mice.

These findings mean that without the IRE1α protein, the pancreas does not produce much insulin. Without insulin, blood glucose builds up in the KO mice and may cause diabetes.

The researchers also wondered what a buildup of preproinsulin in the ER might do to cells. They thought that a buildup of this protein might cause a type of cell damage. This particular damage is called oxidative stress. 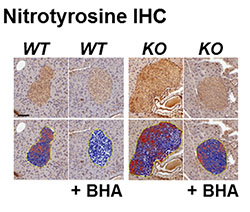 Microscopic pictures of insulin-making tissue in the pancreas.

When both wild type and KO mice were fed the antioxidant food, they had much lower levels of nitrotyrosine in their pancreases than similar mice that ate regular food. This shows that food with anti-oxidants can reduce oxidative stress in the beta cells of both WT and KO mice.

Remember that KO mice had much higher glucose levels than WT mice after feeding. But wild type and even KO mice that fed on the diet high in antioxidants had low blood glucose after eating. In fact, their blood glucose was even lower than the healthy wild type mice that ate regular food. This suggests that eating foods with anti-oxidants may be good for those with diabetes.

Because the antioxidant food had a positive effect on diabetic mice, the researchers hope it may be able to help people in the same way. Next, they are taking their research a step further. They are trying to learn if these special foods can reduce blood glucose in general. If they can, it could help some people avoid developing diabetes.