Evolution: is any process of growth, change or development over time.

Gene: a region of DNA that instructs the cell on how to build protein(s). As a human, you usually get a set of instructions from your mom and another set from your dad… more

Mimicry: the act of one organism looking or acting like another organism.

Müllerian Mimicry: a special kind of mimicry in which one toxic species evolves to look like a different toxic species.

Predator: an animal that eats other animals to survive. For example, a lion is a predator… more

Warning Coloration: bright or noticeable colors or patterns on an organism that suggest they have a toxic defense mechanism, such as poisons in the skin.

Juan lived in a small town surrounded by rainforest in the mountains of Peru.  One of his favorite animals was the splash-back poison frog. Juan learned to recognize this frog’s brilliant colors and other colorful poison frogs near his home.

One day he noticed something strange – he heard two male frogs singing near each other. They both looked like the splash-back poison frog, but they had completely different songs. Juan also noticed different colored eggs in the territories of each male. One male was guarding white eggs. The other male was guarding black eggs. Different songs and egg colors helped Juan realize that these two different frogs, which looked the same, were actually different species!

At first, Juan saw two types of frogs. They looked the same, but had different songs.

Usually when we think of members of a single species, we think they will look similar to each other and different from other species. But sometimes this isn’t true. Mimic poison frogs can look different, depending on what other frog species they are mimicking. In the PLOS ONE article “Phenotypic and Genetic Divergence among Poison Frog Populations in a Mimetic Radiation,” scientists investigated how a poisonous frog from the Amazon rainforest in Peru uses this mimicry to avoid being attacked by predators.

The Amazon rainforest is a beautiful place, but it is also a giant snack bar for predators. And what’s on the menu depends on how big you are. Smaller animals tend to find themselves on the menu of many larger animals. Because of this, many small animals will try to hide by blending in with their surroundings. If a larger animal can’t find them, they can avoid being eaten. 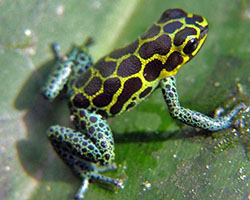 Other animals take a different approach. Rather than sneaking around, they will strut their stuff by sporting bright colors and/or bold patterns. It is as if they are trying to say “eat me if you dare!”

So what’s special about these animals that lets them avoid being eaten even though they stand out? As it turns out, the bright colors are meant to warn other animals to avoid eating them because they taste very bad or are poisonous. Warning coloration tells other animals that if they try to taste the poisonous animal, they will regret it.

Many different animals have this kind of coloration, from butterflies to tropical frogs. The poison frogs of South and Central America, known as dendrobatid frogs, are a great example of this. They have poisons in their skin, and their brightly colored bodies warn potential predators to back off. 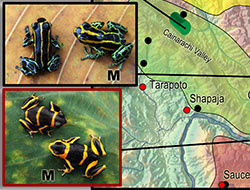 The colors and patterns were very different in frogs of the same species from separate populations.

They showed that this was the case even from a “bird’s eye view.” They used special methods to look at the frogs through the eyes of birds, and showed that they still looked very different from one another. Birds are one of the main predators on little frogs on the forest floor, so it is important to understand what the frogs look like from this perspective.

Predators don’t always know right away what these bright colors mean. It turns out that they have to learn what is good to eat and what isn’t. They do this by trial and error. If they get a mouthful of poison from a bright red animal, they learn not to eat any animal with a similar color. But they still might try to eat animals with different colors.

If a frog has a pattern similar to another poisonous animal in its environment, it might be less likely to be tasted by predators. After a predator learns the colors of one bad-tasting animal, it’s likely to assume other animals with similar colors also taste bad. Because of this, the predator would likely avoid both animals altogether. 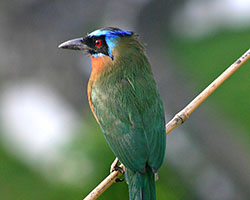 The blue-crowned motmot is one bird that may try to eat Peruvian poison frogs.

To study whether frogs were relying on this Müllerian mimicry, scientists looked at the color patterns of frogs through the eyes of their predators. Using their “bird’s eye view” method, they showed that the colors of the model (the animal the frogs wanted to look like) and mimic (the mimic poison frog itself) were more similar to each other than they were to those of the other populations of mimic poison frog. This meant that each population of the mimic frogs looked more like the local model species than like the other color pattern types of their own species.

Scientists also looked at the genes of the different colored populations of frogs. They found that these different frog populations were very closely related even though they looked very different. They also found some places where mimic frogs with different color pattern types were breeding together, making offspring that looked like a mix of each type.

So, why study this puzzle of patterns in poison frogs? These small frogs can quickly evolve new colors and patterns to look like their neighbors because it helps them avoid becoming lunch. Now that scientist know that species’ color patterns can change quickly in different populations, they are trying to figure out how this process works. In particular, they are finding out which genes control these differences in color pattern, and how they can evolve so quickly.

Listen to a Podcast:  Cute Colorful Poison Dart Frogs and Their Mimics