How careful are you with your words? Scientists are figuring out how to choose words more wisely to have a better chance to stop certain diseases.

Database: A collection of information for people to access or search.

Genetic information: Information about the genes of an animal or human.

Ontology: An organization system using a common controlled vocabulary. In addition to biology, disciplines such as computer science also have ontologies. Not to be confused with the philosophical definition of ontology, which is the study of the nature of being.

When you read the word chips, you might picture the perfect potato chip – salted and covered in your favorite flavoring or dip. But you might also picture a different type of potato snack… a type that is a little chunkier and that you can dip in ketchup. In the United States, chips are what we call potato chips, but in the United Kingdom, chips are what Americans call french fries. The words that we use can have several different meanings that can end up being pretty confusing. This can make it difficult for other people to understand what you mean to say.

This misunderstanding also occurs in science and can cause a lot of confusion between scientists. In the PLOS Biology article “Linking Human Diseases to Animal Models Using Ontology-Based Phenotype Annotation(link is external),” scientists developed a new way of naming animal characteristics in a database so that they can keep the genetic information of animals organized. This organization makes it easier to compare the genetic information of animals to that of humans by using a specific wording system.

Why are Similarities Important?

Have you ever noticed that brothers and sisters look alike? This is  because they have very similar genes. Genes are lengths of DNA that hold instructions for what your body should be made of and how it will look. All living things have genes, and the genes of some humans and animals are very similar. Scientists can use these similarities to study animals in a way that can help them learn about people, including identifying genes that cause disease. By studying the genes that cause problems in animals, scientists may be able to find a way to fix the problem-causing human genes. 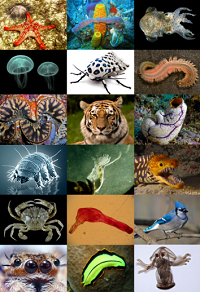 Scientists can sometimes predict what genes an animal has based on what the animal looks like.

When you look at an animal’s color or its size, you are getting a peek at that animal’s genes. Genes affect an animal’s phenotype, or how it looks. Because of this, scientists can predict what genes an animal has based on its appearance.

Scientists used to describe an animal’s characteristics (like color, size, or number of legs) using everyday language, as if they were talking to a friend or parent. But different scientists can use different everyday language. This makes it difficult for other scientists to understand the appearance of the animal being described. Since an animal’s appearance tells us about its genes, scientists then have problems figuring out what genes are in the animal’s DNA.

The Work of Rewording

These scientists created their own searchable database, like a Google for genes. They can use a few key words based on body structure, body function, or development to search for gene similarities between animals and humans.

These scientists decided to only use a certain set of words to describe animal and human characteristics. They called this special set of words an ontology. Using this set of words in different ways, the scientists then described the characteristics of many animals. Then they put their descriptions into a computer so other scientists could look them up.This works much like Google does. For example, if you were looking for the year the Boston Red Sox won the World Series, you would type in “Boston Red Sox World Series” and odds are that you would find the information you want in the first webpage listed.

Of Mice and Men

Using this new way of labeling genes, scientists found that mice have a gene similar to human gene EPB41.

In the animal gene database, if another scientist was looking for what genes a mouse has that are similar to a specific human gene called EPB41, they would type in “human gene EPB41 mouse.” Seconds later, the computer would be able to show them the mouse genes that might be similar to human gene EPB41. This search can work for many different types of animals.

In order to apply this ontology to humans, the scientists then added information from other studies, including some studies detailing the human genome. They looked up all the studies done on the genes of animals like mice, zebrafish, and flies to see what human-like genes the animal has, and added this information to their ontology. The scientists then searched through the ontology for important human genes that had matching, or similar, animal genes. 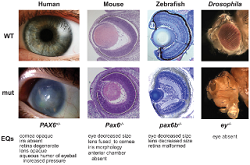 Here is an example of a genetic mutation that produces similar effects in humans, mice, zebrafish, and fruit flies. Click on the photo to get the whole story.

Here is an example of a genetic mutation that produces similar effects in humans, mice, zebrafish, and fruit flies. Click on the photo to get the whole story.

Imagine a scientist who wanted to study a human gene that causes cancer, and by using this database, she found an animal with a very similar gene. That person could then try to find a way to stop the gene from causing cancer in animals, and apply any findings to the similar human gene. Important comparisons like this were found using the ontology, simply by describing all of the information from different studies with the same set of words.

What’s in a Word?

The new comparisons the scientists found are very important to medical research. New genetic similarities between humans and animals can now be explored thoroughly, hopefully helping us to find more ways to take care of or cure people who are sick. The system the scientists created can also be used for future studies, which means we will not miss any important comparisons that could lead to helping people with genetic diseases. So we see that the specific words scientists use are more important than anyone could have guessed.