Examined: investigate thoroughly, often using experiments and other tests. To test or investigate someone or something. To study something.

Nutrient: a vitamin, mineral, or chemical in food that the body uses to grow, repair, or do work… more 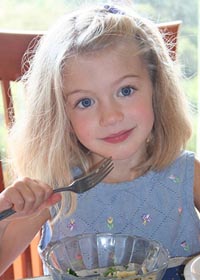 Brain food like veggies help you grow up to be strong and smart. Image by Angela Sevin

When your mom tells you to eat your vegetables or she packs you a healthy sandwich for lunch, she’s not only giving you food to help your body grow strong. She’s giving you food to help your brain grow strong too. Not eating enough food or eating only junk food when you are young can actually keep your brain from functioning as well as it should. In the PLOS Biology article “Compensatory Growth Impairs Adult Cognitive Performance ,” scientists examined how eating poorly when you are young can hurt your brain as an adult.

A good way to think about how the brain works is by comparing it to a computer. Both store information about many topics, and both are made up of many parts that are all important for it to work properly.  Both computers and brains also need some sort of power to function—electricity for a computer and food for your brain. You might have noticed that if you don’t give your computer enough power, it might not run like normal. Some scientists realized that the brain may be the same. If you don’t give your brain enough nutrients from healthy foods, it might not run like normal.

When you grow from being small to being tall, your brain grows with you. To grow strong, your brain needs just the right amount of nutrients when you’re young so that it can function at its best as you grow older. Scientists wanted to know why this might be the case.

To answer that question, scientists conducted an experiment with little birds called zebra finches. Scientists used sibling birds in the study, two brothers and two sisters. One of the brothers and one of the sisters was put on a healthy, normal diet right after they were hatched. The other brother and sister finches were placed on a very restricted diet, which means they were given much less food. Remember that less food means less nutrients to help the birds grow. 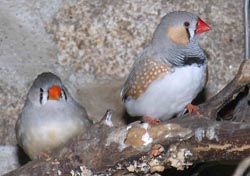 After the 20 days, researchers then let the little birds control their own diet. So the hungry finches could eat like normal. As the very small finches ate normally, they grew very fast. Scientists recorded the finches’ growth patterns and at the end of 50 days of normal eating, the scientists again had the finches perform a simple task that was similar to the first task. The finches had to learn to identify which color screen scientists had placed food behind.

Scientists conducted the experiment to see what differences existed between normal finch’s brains and the brains of finches with poor nutrition when they were young. Scientists thought there might be differences in how well the birds performed based on the amount of food they received when they were young. They also noticed that when the hungry finches on a restricted diet grew into adults, it happened really, really fast. Could fast growth also cause different performance?

The finches on a restricted diet started off growing at a much slower rate than their normal brothers and sisters. But when they were allowed to eat more, they grew at a much faster rate than the normally fed finches. This is called compensatory growth. Compensatory means that the small, hungry finches were growing much faster because they were making up for all the growth they should have normally undergone. The finches that weighed so little after 20 days on a restricted diet had to grow really, really fast to catch up to their normal brothers’ and sisters’ weights.

Junk food like candy lacks nutrients important for your brain to grow big and strong. Image by Mstroeck.

When they were young, the birds that were given less food did not perform learning activities any slower than their normal siblings. However, after the hungry birds grew so rapidly under compensatory growth, it took them much longer to learn how to complete the scientists’ task of finding the food. It was only after the compensatory growth that the hungry finches had trouble performing the simple task.

The results of the experiments allowed scientists to conclude that the period of rapid growth let the bodies of the birds catch up, but it did not let the birds’ brains grow at the same fast rate. In fact, the hungry birds’ ability to perform the task declined, meaning they had learning delays as adults because of their poor nutrition early in life.

What Does This Mean for Us?

It means you should try and eat healthy every day, especially when you are young and need those nutrients to grow a strong body and mind. If you aren’t eating well-balanced meals, it could mean brain problems as you grow older. So when your mom tells you to eat your vegetables to grow big and strong, believe what she says. You need those nutrients for a healthy body and a healthy brain.