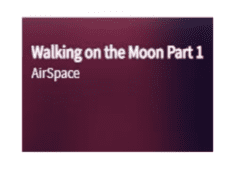 50 years ago this July, humans set foot on the Moon for the first time.

You probably know the highlights – Kennedy’s moonshot challenge, Armstrong’s first small steps, three astronauts returned safely to Earth – but there was more to the Apollo program than getting there and back. When we landed Americans on the Moon, there was a lot we didn’t know about our nearest celestial neighbor. Would the astronauts sink into the lunar dust like quicksand? Would they encounter extraterrestrial germs and bring them back to infect the Earth? What would could rocks and dirt (regolith, actually) tell us about how the Moon formed? To celebrate the 50th anniversary of the first Moon landing, AirSpace examines what we knew then, what we know now, and what mysteries of lunar science still remain. And we’ll admit, we’re just a *little *excited about the upcoming anniversary. So much so, this is part ONE of TWO.

In our last exciting episode, we explored all the science the Apollo astronauts performed on the lunar surface. In part two, we’re talking about the important science still happening with Apollo Moon rocks here on Earth a half-century later.