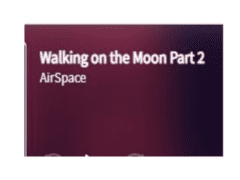 Next week is the 50th anniversary of our first steps on the Moon!

In our last exciting episode, we explored all the science the Apollo astronauts performed on the lunar surface. In part two, we’re talking about the important science still happening with Apollo Moon rocks here on Earth a half-century later. Of all the 842 pounds of lunar material the astronauts collected up there, three samples were sealed away for scientists to study far in the future. And the future is now! We’ll speak to two scientists from NASA Goddard who will be working with the heretofore sealed samples, which are still in pristine, untouched condition from when astronauts of yesteryear plucked them off our nearest celestial neighbor. And Emily speaks to Lunar geologist Dr. Jennifer Whitten who’s working on a proposal to send a rover back to the Moon to carry on Apollo’s legacy of lunar exploration. Lunar science of the future happens now!

To celebrate the 50th anniversary of the first Moon landing, AirSpace examines what we knew then, what we know now, and what mysteries of lunar science still remain.