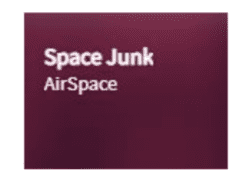 Space is a mess. At this moment, there are literally thousands of human-made objects cluttering up Earth orbit.

There’s the big stuff you would expect, like satellites. But, when two of these large objects collide, they can create millions of tiny orbiting pieces. And all of these little particles can cause big problems.

This episode is all about orbital debris, a.k.a. space junk – where it comes from, how we’re trying to solve the debris problem, and what happens when it comes back to Earth. We’ll talk with Donald Kessler, the former NASA scientist who first modeled the dangers of space junk, and historian Lisa Rand, who shares the creative ideas on how to clean it up (think lasers and… gecko feet).