ACS: Adventures in Chemistry - Diapers, the Inside Story

There is some pretty cool science going on in a diaper! See how chemistry is used to help disposable diapers really soak it up!

. First, open up the diaper and lay it out flat on a tray.

2. Add 1 drop of food coloring to about 1 cup of water. Use a spoon to gently mix.

4. Use scissors to poke a little hole in the lining of the diaper. Carefully peel off the top layer and look underneath.

5. You can touch the gel to see what it feels like. Be sure to wash your hands after touching or playing with the gel.

When you pour water on the diaper, the diaper will absorb the water and get bigger. When you pull the liner off, you will see a gel that looks kind of like slush.

What makes the gel?

Get a dry diaper and try this to find out!

1. Either use scissors or tear the elastic border off both sides of another diaper. This time, put the diaper in a gallon size zip-closing plastic bag.

2.  While the diaper is in the bag, peel off the inside liner so that the cotton padding is exposed.

3.  Leave the pieces of diaper in the bag and close the bag securely. Hold it from the top and shake the bag.

4. Tilt the bag to the side. You should notice little white granules collected in the bottom corner of the bag. These granules are a special water-absorbing chemical called sodium polyacrylate.

5. Slowly open the bag and carefully pick out and throw away the large pieces of cotton and plastic.

6. Use a plastic spoon to get as many granules as you can from the corner of the bag and place them in a cup.

7.  Place about ¼ teaspoon of the granules in another cup. Add about ¼ cup of water and watch from the side.

The sodium polyacrylate will change into a gel as it absorbs the water. The gel will slowly rise in the cup.

That’s what happened in the diaper to make all that gel! Sodium polyacrylate can absorb a huge amount of water compared to most other materials.

Save the extra sodium polyacrylate for the next activity you can do to amaze your friends and family!

What else could you try?

Amaze your friends and family with this sodium polyacrylate trick.

1.  Before you do the trick, and without anyone seeing what you are doing, place about ¼ teaspoon of sodium polyacrylate in one of the unclear cups.

2.  Line the 3 unclear cups up in a row and pour about 1 tablespoon of water into the cup with the sodium polyacrylate.

3.  Move the cups around and challenge your audience to choose which cup has the water in it.

4. After someone picks the cup, turn over one empty cup and then the other empty cup. Finally, turn over the cup with the sodium polyacrylate and absorbed water.

Everyone will be amazed because it will look like the water disappeared! Because this is science, reveal your secret to show them the super-absorbing power of sodium polyacrylate!

What’s happening in there?

How was the sodium polyacrylate able to absorb all that water?

To answer these kinds of questions using chemistry, we have to think about the atoms and molecules that the water and the sodium polyacrylate are made of.

Water is H2O. This means that it is made up of two hydrogen atoms (H) and one oxygen atom (O). But the atoms in a water molecule are bonded together in such a way that one part of the molecule has a negative charge and the other part a positive charge. Because opposites attract, water molecules are very attracted to each other and to other molecules which have positive and negative charges. 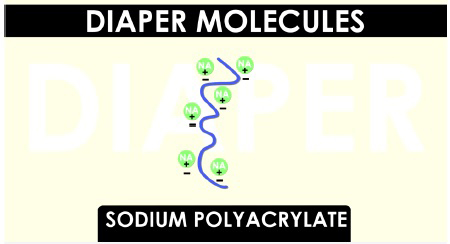