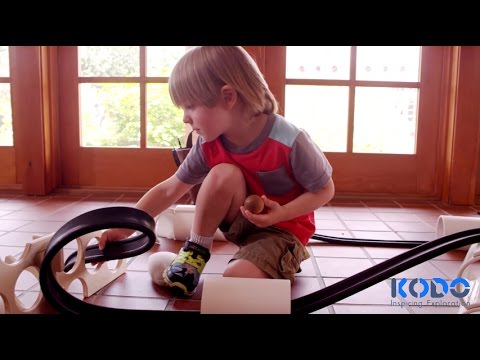 We’ve come up with our top STEM words that we feel every young learner should be familiar with, and have given examples of how to introduce these words in a developmentally appropriate way.

We encourage you to use them often in context during children’s play. You’ll see that the more you use these words in context, the less you will need to explain what you mean. In a short time, children will use the words on their own as they begin to understand their meanings!

1. Hypothesis
Definition: a proposed explanation made on the basis of limited evidence as a starting point for further investigation.
Example: “What is your hypothesis for what will happen after we put the ball at the top of the ramp?”

2. Theory
Definition: a supposition or a system of ideas intended to explain something, especially one based on general principles independent of the thing to be explained
Example: “You think the ball will go up the ramp when we let go of it? That’s an interesting theory. Why do you think that?”

3. Elevation
Definition: the height to which something is rises
Example: “What do you think will happen if we change the elevation? What will happen to the ball if you lift the ramp higher or lower it’s elevation?”

4. Speed
Definition: the rate at which someone or something is able to move or operate
Example: “How do you think the ramp’s elevation will affect the ball’s speed?”

5. Experiment
Definition: a scientific procedure undertaken to make a discovery, test a hypothesis, or demonstrate a known fact.
Example: “Now that we’ve created our hypothesis, what experiment can we create to test it?”

6. Pattern
Definition: a repeated decorative design.
Example: “I see that in your ramp system, there is one long, then one short, one long, and another short. What size ramp is next in this pattern?”

7. Balance
Definition: a condition in which different elements are equally proportioned
Example: “It looks like the teeter totter is off balance. Which side do you think needs more weight to in order to make both sides equal?”

8. Friction
Definition: the resistance that one surface or object encounters when moving over another.
Example: “What do you think would happen if we moved our ramp system to the smooth, wooden floor that has less friction than the carpet?”

9. Predict
Definition: say or estimate that (a specified thing) will happen in the future or will be a consequence of something.
Example: “If I use the heavy ball instead of the light one, what do you predict will happen differently?”

10. Observation
Definition: the action or process of observing something or someone carefully or in order to gain information
Example: “Tommy is going to test his hypothesis. Sara, why don’t you and I make observations, so we can take notes and drawings of what happens!”

11. Force
Definition: any interaction that, when unopposed, changes motion of an object
Example: “When you applied more force to the ball by pushing it, I noticed it went faster.”

12. Data
Definition: facts and statistics collected together for reference or analysis
Example: “Let’s collect some data so we can compare how far the ball travels on different ramp systems.”

13. Design
Definition: purpose, planning, or intention that exists or is thought to exist behind an action, fact, or material object.
Example: “Let’s try something new. Before making a ramp system, we’ll make a design on paper, then follow it as we build.”

14. Cause
Definition: something that gives rise to an action, phenomenon, or condition.
Example: “The ball fell off here – what do you think was the cause for that?”

15. Effect
Definition: a change that is a result or consequence of an action or other cause.
Example: “I noticed when you moved this ramp, a little gap formed between it and the next one. I wonder what the effect will be on the ball when we try again?”